The Power Window Doctors repair and replaces the 100’s of Power Window Regulator, Motors and Switches each Month.   Most shops may do 5-10 per month and it takes them hours to days to complete.  We’ll be done in 30-45 Minutes. Why? When it comes to window regulators , we are the specialists.

With over 20,000+  power window repairs completed in the last 6 years, you can rest assured we’ll get your window back up in no time.

We use quality window regulators, motors and switches.

Regulators are reinforced when possible.

You’ll get a better power window regulator repair at a better price point from:
The Power Window Doctors

Save Time and Money

We’ll Come to You. Mobile Service

What are the Components of Power Windows?

Simply: Regulator – Motor – Switch     – At some point in the life of the vehicle, one or more of these will fail. What are they? Read on.

Power Windows have been an option in vehicles as early as 1940 in the Packard. It was a Hydro Electric system and Ford followed up in 1941 with a system of their own. Power Windows were an Option up till about the 80’s.  About this time they became a standard feature on most vehicles.  Manual Windows now have become the “Option”.

Have you wondered what’s inside your door? What actually makes the car power windows go up and down? Some vehicles have power windows that go Up and Down Automatically.  They also have an “anti-pinch” feature that stops raising if they are obstructed.  Maybe you’ve see videos where the window is opened by turning the key in the door lock.

We’ll explain what the components of the power windows are, AND explain what power window parts are replaced, repaired or rebuilt. Most of the time, rebuilding the OEM (Original Equipment Manufacturer) part is stronger than replacing it.

The main component of the modern power window is the Regulator or Lifting Mechanism (Assembly).  It’s essentially at the heart of the power window system.  You’ve probably heard the saying “Oh, it’s just Off Track”.  That’s not going to be the case any longer. Modern power window regulators don’t go “off track”. There’s some pivot point or stress point that has broken.

There are several styles of Window Regulators.  We’ll cover the primary styles that are used in the vehicles today.

Essentially the Power Window Regulator job is to lift & lower the glass while keeping it level.  This is done by an Electric motor that is geared via spools or reduction gears.  Providing sufficient torque to lift and lower the window.

What’s important about Power Windows is they can’t be forced open.  The Cables and Gears take care of this.  Your vehicle is vulnerable to vandalism and theft when the power window regulator is broke. Duct Tape, Wedges or little pieces of cardboard broadcast that THIS WINDOW IS BROKEN. 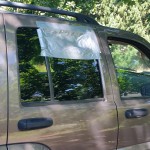 All Power Window Regulators have weak spots.  This is due to the plastic parts, or environmental strains that wear out or break. Power Window Repaired - Atlanta GA / The Power Window Doctors use OEE (Original Equipment Equivalent) or stronger parts when repairing your power window regulator.

Manual window regulators are essentially the same, except, there are no wires, motors or switches.  They wear out similarly but are not as popular as they were.

Power Window Motors have evolved over the years. Prior to about 1995, power window motors were more universal. The same motor was used through out many vehicle models in Ford, Chrysler, GM (Chevrolet) and even imports Honda, Nissan (Datsun), Volkswagen, Mercedes and BMW. That is not the case today. Now most are designed for specific models, years and regulator design.  One particular motor may only fit 2-3 years of a specific vehicle.  Another may fit a wide range of vehicles (Ex: GM Trucks 2000 – 2006, or Ford Trucks (1995 – 2000).  Those are now the exceptions to the rule.

Power window motors are now getting smaller and more specific. They also are not user friendly when it comes to replacing just the motor.  A lot of time the power window regulator and motor come as a combination.

This is due to springs (that can cause injury when released) or how the cables are spooled and tension applied.

Power Windows may be wired in different ways, dependent upon the features.

This system is just that, Basic.  Power is fed to the front drivers door and comes back through to control the other doors.  They all feed through the same 20 Amp fuse. Most of the time (99.999%) there is no such thing as “just a blown fuse”.  Typically if there is a switch problem, it’s going to be worn contacts or diodes.

In these systems the power windows work in a completely different way. Some cars have what’s called a Body Controller (Body Control Module – BCM) that centralizes the electronic functions. The power for window motors doesn’t come directly from the switch. Instead it is connected to one of the many modules in the vehicle. (Average is 25 modules) Some have a module in each door.

Vehicles that have lots of controls are likely to have this. Some switches include the power mirror controls, power door locks and even power seat adjustments. This makes the switch more expensive to replace simply because one window doesn’t work. Most likely it’s the Drivers Power Window that stops working.

Note: On some vehicles like this, the dealer has to “Program” the switches.  The software isn’t available to the general public. (Chevrolet Trucks 2007 >, Chevrolet Trailblazer Master Switch etc.)

Diagnosing the Power Window is a simple process. What happened just before and after the window stopped working? Did you hear a SNAP – POP! and the window just sank in the door or dropped suddenly? When you pushed on the button nothing happens, it just didn’t go down? It went down and now when you pull the button, it doesn’t go Up? It works intermittently, at times it goes slow and other times it doesn’t do a thing?

Here’s some questions for diagnosing:

Call for a complete Diagnosis.  We’ll quote a fair price for repairing or replacing the component that’s failed.  Providing a 1 Yr Warranty on Parts and Labor.  Let Power Window Repaired - Atlanta GA / The Power Window Doctors be your first choice.